On the 5th of October bitcoin broke back through the key mark of $50,000. Many have been speculating whether the recent technical analysis suggests it is setting up to push past the previous all-time-high of US$64,000.

What we consider to be more important is that there are a number of material factors in the digital asset industry that have not co-existed till now. Together these lead us to the question of whether we may be on the cusp of institutional adoption.

We analyse and explain three of these factors below:

Following the latest ban by China on 24th of September, the world looked to the United States for clarity from the regulators and lawmakers over their stance towards cryptocurrencies. Treasury head Jerome Powell has been notoriously weary of digital assets and the new SEC chair Gary Gensler initially appeared to be of a similar mindset, adopting a cautious and non-committal approach to how the SEC plans to treat them.

In a boost for the crypto industry and associated institutional interest, both Jerome Powell and Gary Gensler stated they had no intention to ban cryptocurrencies on the 30th of September and 5th of October respectively. Couple that with the support that Gensler reiterated for a bitcoin futures based ETF on the 29th of September, along with his recent comments that Bitcoin could be seen as a "store of value" and a picture begins to emerge that the world’s most influential regulator is starting to warm to crypto (within reason).

The SEC has wrestled with allowing Bitcoin ETFs backed by physical bitcoin, given that so much of the underlying trading occurs on unregulated exchanges.

The alternative would be to allow a futures-based ETF via a regulated exchange such as the CME. This would address the concerns about market surveillance, but futures backed products are often inferior to the ones based on spot. With CME Bitcoin futures volumes totalling US$51 billion last month, having grown 236% year-on-year according to data from the Block, there has been a lot of optimism about relying on futures markets to launch the first ETFs.

A raft of bitcoin futures ETFs have been submitted to the SEC recently, and indications of how the SEC will approach these are expected as early as 18th of October this year (note: little can be learned from the SEC's recent choice to delay their decisions on four applications, as they were based on physical not futures). Should the SEC approve a bitcoin ETF for the first time, institutional investors will take comfort from a proverbial greenlight, with many expecting investor flows into the space to follow.

Both supporters and detractors have recently been likening bitcoin to the internet in 1997. Bitcoin has been growing at an annual rate of 113%, vs the internet’s growth at that time of 63%. Should bitcoin’s adoption slow to that of the internet’s, it would still lead to 1 billion users by 2024 and 4 billion users by 2030. With institutions such as Visa, Mastercard, Paypal, BNY Mellon, Morgan Stanley, Goldman Sachs and JP Morgan to name but a few all reversing their stance against bitcoin, that isn’t looking likely. 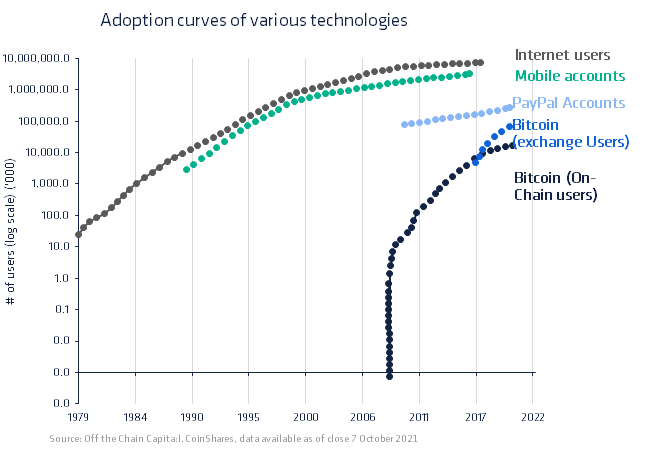 On the 8th of September 2021, El Salvador became the first country to adopt bitcoin as legal tender, but as newsflow since then suggests, they will certainly not be the last. It is estimated that over 50% of the population are now using the government’s Chivo cryptocurrency wallet, compared with only around 30% having a bank account.

According to a recent report by the World Bank, approximately 1.7 billion people remain without access to a bank account, however 1.1 billion of those own a mobile phone. There has long existed a narrative that cryptocurrencies can provide a solution to banking the unbanked. The World Bank also reported in 2018 that the overall global remittance market had grown to US$689 billion, including US$528 billion to developing countries. Alongside the commission-free Chivo ATMs in El Salvador, 50 commission-free Chivo ATMs have now been installed throughout the USA, where some 2.3 million people from El Salvador descent live and work. It is estimated that El Salvadoreans currently spend approximately $400 million in remittance fees per year. With the new ATMs allowing individuals to send fast, commission-free payments across borders, we may be witnessing the first case study of blockchain technology improving on the outdated and often expensive financial system.

Ukraine also announced their plans to legalise bitcoin and cryptocurrencies. With Cuba, Brazil and Paraguay also all throwing their hats into the ring, how many more dominos fall will be key to watch in Q4 and beyond. 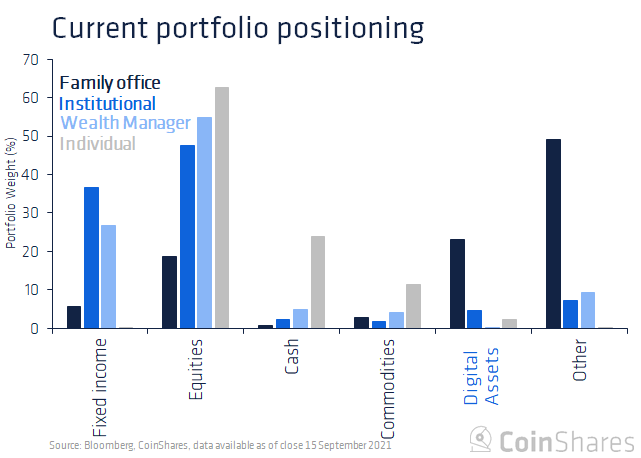 Of the survey respondents who said they had not invested, regulation (21%) was cited as the main reason for not investing. Closely linked to this were corporate restrictions at 19%. Volatility remains a big concern amongst investors. Encouragingly, very few of the respondents see digital assets as lacking fundamentals.

Signs of a potential inflationary problem are beginning to reveal themselves, most notably the tightening employment conditions (and consequent rise in wages) coupled with rising producer and commodity prices across the globe. However, investors remain divided, with the outlook for inflation falling into two schools of thought: those that believe the inflation effects are more transitory in nature, and those that see inflation rising to a point where it threatens economic stability.

Conceptually, it makes sense that bitcoin would be a hedge against inflation. It is what an economist would call a “real asset”—an asset of limited and predictable supply that is often priced in US dollars. Therefore, if the supply of US dollars is rising, or that of any other fiat currency, then it is likely that bitcoin will appreciate against those currencies, even if its purchasing power were to remain stagnant. 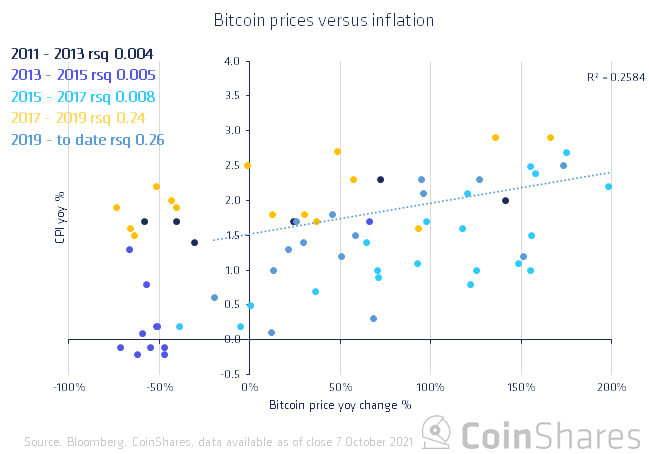 With energy prices rising, surging retirements from the baby boomer generation and increasing risks of further wage rises, higher inflation remains a real risk. But we remain unsure as to exactly what will happen to inflation over the coming 5 years, consequently we see adding bitcoin and other real assets as a prudent measure to protect portfolios from the tail-risk of out-of-control inflation.

We have written extensively about the valuation of Bitcoin, but it is worth revisiting our total addressable market approach. Investment fund flows imply that Bitcoin has begun to cannibalise gold’s market share, at present Bitcoin represents 9.1% of gold’s market share.

We have recently seen SEC chair Gary Gensler acknowledge that Bitcoin is now “a store of value that people wish to invest in, as some would invest in gold”, this further establishes its identity as a real asset.

As inflation threats in the near-term are likely to further escalate, it’s not outlandish to see the Bitcoin price achieve US$100k, which would represent only 17% of gold’s market value.

Coming towards year end it is clear there are a range of potentially price-supportive events such as increasing regulatory clarity, rising inflationary risks, increasing adoption and improving investor appetite - these factors are beginning to tick all the boxes for greater institutional investor participation in the asset class.

The information contained in this document is for general information only. Nothing in this document should be interpreted as constituting an offer of (or any solicitation in connection with) any investment products or services by any member of the CoinShares Group where it may be illegal to do so. Access to any investment products or services of the CoinShares Group is in all cases subject to the applicable laws and regulations relating thereto.

Although produced with reasonable care and skill, no representation should be taken as having been given that this document is an exhaustive analysis of all of the considerations which its subject-matter may give rise to.This document fairly represents the opinions and sentiments of CoinShares, as at the date of its issuance but it should be noted that such opinions and sentiments may be revised from time to time, for example in light of experience and further developments, and this document may not necessarily be updated to reflect the same.

The information presented in this document has been developed internally and / or obtained from sources believed to be reliable; however, CoinShares does not guarantee the accuracy, adequacy or completeness of such information. Predictions, opinions and other information contained in this document are subject to change continually and without notice of any kind and may no longer be true after the date indicated. Third party data providers make no warranties or representation of any kind in relation to the use of any of their data in this document. CoinShares does not accept any liability whatsoever for any direct, indirect or consequential loss arising from any use of this document or its contents.

Any forward-looking statements speak only as of the date they are made, and CoinShares assumes no duty to, and does not undertake, to update forward-looking statements. Forward-looking statements are subject to numerous assumptions, risks and uncertainties, which change over time. Nothing within this document constitutes (or should be construed as being) investment, legal, tax or other advice. This document should not be used as the basis for any investment decision(s) which a reader thereof may be considering. Any potential investor in digital assets, even if experienced and affluent, is strongly recommended to seek independent financial advice upon the merits of the same in the context of their own unique circumstances.