At this point you’ll be hard pressed to have missed the topic.

Bitcoin’s ongoing production rate is halving in May 2020 and opinions abound concerning what this means for the future of both the system and the asset.

For readers new to Bitcoin or unfamiliar with the technical mechanisms underpinning the system, the halvings can seem cryptic and strange.

Similarly, for those who think of bitcoins as currency: No other currencies have pre-determined monetary policies that are independent of economic factors. In all central bank monetary systems, committees set the price and production rate of money. In Bitcoin, the production rate is predetermined and unchangeable, and the price is set solely by market interactions.

What do these differences mean in practice, and what are people supposed to make of it?

Click here to read our analysis of 5 popular theories on the upcoming Halving.

This process repeats itself automatically every 210,000 blocks, or roughly every 4 years. 2020 is a halving year and we are about to witness Bitcoin’s third halving, taking the block reward from 12.5 to 6.25 btc. 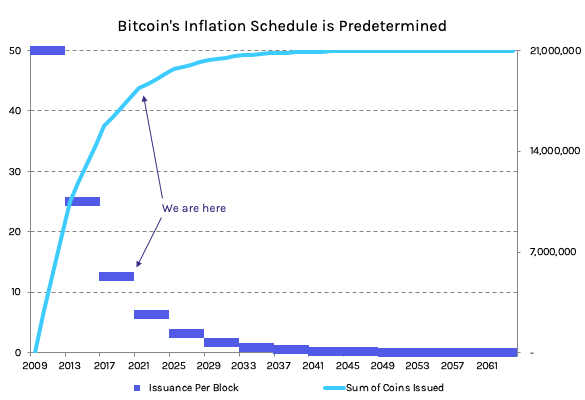 Bitcoin’s Supply/Demand Mechanics Differ from Those of Regular Commodities

Traditional commodities production is sensitive to price because there is significant elasticity in production capacities. By way of example, if commodity prices rise, production will increase as previously unprofitable supply turns profitable and enters the market. The increased supply then puts downwards pressure on price until a new balance is established. The opposite will happen if the price falls.

The only elasticity of production is that which is caused by increases or decreases in hashrate in between difficulty adjustments. These happen every 2016 blocks, or about every two weeks, so even the short-term effects of changes in hashrate are temporary.

On longer time scales, the only available mechanism to reduce the production rate of bitcoins is the halvings, and their timings are dre-determined. When the halvings occur, the ongoing bitcoin production is cut in half from one block to another, and there is no way of increasing it ever again.

From a supply/demand point of view the effect should be fairly obvious. Every day, a certain amount of new bitcoins is added to the market. Mining is highly competitive and on average, miners have to sell the lion’s share of their daily 1,800 btc (or an average of $13.3m per day in 2019) production to cover costs, causing a persistent selling pressure in the market.

Something to consider in this context are flows into passive bitcoin investment products. Over the last quarter, inflows into products like Grayscale’s Bitcoin Investment Trust and CoinShares ETPs have averaged around 500 btc per day. On top of that we have inflows into services like Square's CashApp. At a daily average issuance of 1,800 coins, these inflows eat up a little more than 40% of new coins. After the halving, though, if flows remain steady (let alone grow, as they have for the last 4 quarters in a row), inflows will consume almost 85% of newly issued coins. 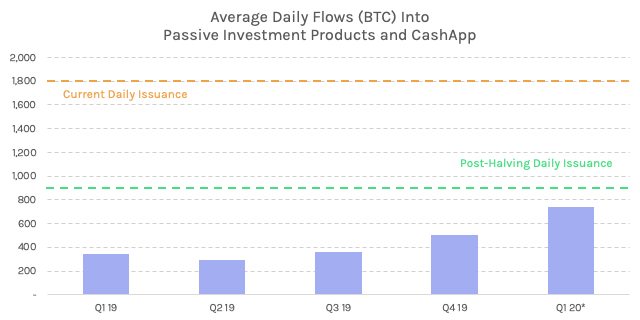 From a Technical Perspective, the Halving Itself is the Simple Part

Any industry veteran will tell you that there’s no magic surrounding the actual halvings––they just happen automatically with no action required by anyone. And let’s also keep in mind that this is the third halving so far, and one of dozens more to come. Both previous halvings went forward without any technical issues and no issues are expected this time around either.

The halving itself is simple to understand. At the time of writing there are approximately 1,800 bitcoins created each day. After the halving it will be 900. After the subsequent halving––expected around 2024––it will be 450, and this will continue until some time around 2140 when the last fractional bitcoin will be added to the total supply of almost 21m.

All halvings are prescribed by the protocol itself and thus already set in stone. Every 210,000 blocks we will have another halving until the issuance of new coins per block finally rounds to zero.

Will this time be different? Click here to read our analysis of 5 popular theories on the 2020 BTC Halving.