The recent correction in bitcoin prices, caused by over-leveraged markets and retail panic selling, were catalysed by media attention around Twitter comments from Elon Musk and widespread mainstream reporting on 4-year old Chinese policies. This has led to the dredging up of many old concerns. We at CoinShares are keen to dispel some of these concerns while shining a light on the actual causes of the correction.

The comments made by Elon Musk were not the reason for the price crash, but they likely acted as a catalyst. Two weeks prior to Elon’s comments there was already skew in the futures market suggesting a correction might be in the cards. Furthermore, after having peaked in mid-April, aggregate open interest in bitcoin futures was already down substantially from $27.4bn to $17.4bn by May 18. Yesterday’s price action shaved another $5.4bn off the open interest, leaving it at a current level of $12bn — a level not seen since mid-February.

We believe this is a healthy correction as over-levered positions have been wiped clean and the market readjusts to lower leverage levels. We observed a similar pattern during the spring of 2020, which culminated in a significant deleveraging event. 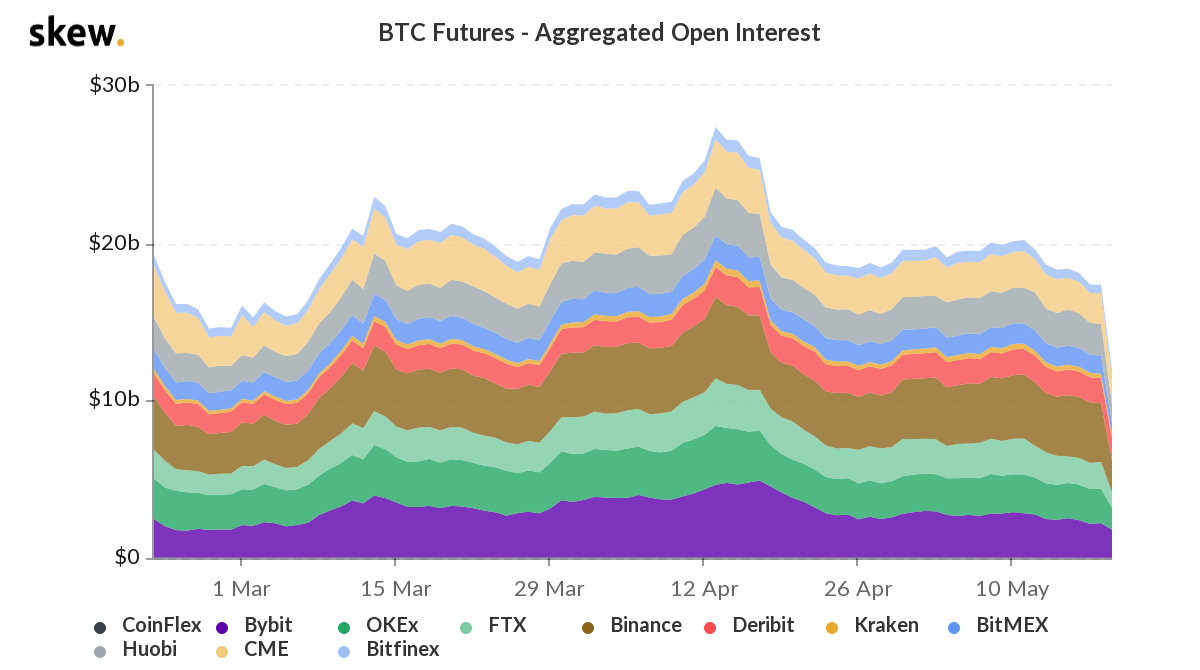 As is common in bitcoin markets, copious amounts of leverage were employed, causing significant liquidation cascades. While the crypto markets in aggregate saw more than $8bn worth of leveraged positions liquidated, bitcoin alone saw liquidations of $3bn — an elevated level, but still nowhere close to the $4bn record from April 2018.

The much quoted news of China putting on new restrictions on crypto trading was probably the least important component of all, even though it may indeed have frightened some investors and caused panic. Not only did the actual news not originate from public sources, they were a reiteration of a policy that has been in place for more than 4 years. In other words, China already had these restrictions in place, and they had been in place since 2017. This highlights the importance of cross-checking the correctness of crypto-related news from Western sources — who often get the story wrong — against actual Chinese sources.

Fund flows highlight that while there have been outflows, they are de minimis relative to the inflows. These are best demonstrated by looking at fund flows as a proportion of total assets under management (AUM). On a net basis the outflows seen over last week and this week so far total US$185m, this represents just 0.52% of total AUM. Inflows this year represent 11.7% of AUM.

The selloff in spot markets looks to have been primarily Asia-driven, with Binance leading the charge. This observation fits into a larger pattern we’ve observed since November whereby the previous trend of coins moving out of exchanges reversed. From its low point of 1.2m btc, current coins on exchange (excluding Coinbase) now stands at 1.6m, a differential of 400,000 btc. 300,000 of those coins have been deposited into Binance.

There’s more data to suggest this selloff has resulted in a continued net flow of coins from East to West, and predominantly the US. During yesterday’s rebound from lows of $30,000, to ~$44,000, Coinbase prices at times led the market by as much as $2,500. This suggests an asymmetric level of buying by Western entities during the rebound.

The above fits into a pattern we’ve seen recently of coin deposits into Binance and withdrawals from Coinbase. Whereas Binance has a predominantly retail-based clientele, Coinbase is famous for being the spot market of choice for many institutional investors. Taken together, this suggests that the recent move has been driven in no small part by Asian retail investors effectively selling to Western institutions. 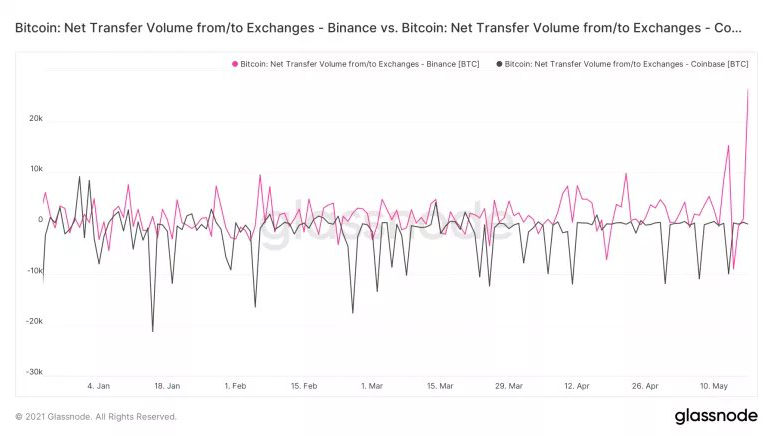 Recent volatility is high but we are by no means anywhere near historical highs. 30 day volatility (98%) remains below the late January 2021 levels of 111%. This is a reminder that Bitcoin is a volatile asset, but as we have discussed before, volatility is the price of opportunity and it can be mitigated by regular portfolio rebalancing as we have previously detailed here.

Bitcoin volumes during periods of market stress tend to rise rather than fall. This fits into a larger trend whereby bitcoin is becoming increasingly liquid and is now regularly trading at US$30bn a day. Volumes during 19 May were higher than usual at US$66bn.

Bitcoin prices from a historical context

Pricing in a historical context (yes, the chart below includes the most recent price moves) highlights the recent correction is well within the historical norms. We show the chart in a log scale to help highlight the magnitude of some of the historical moves.

Bitcoin remains an emerging, highly secure non-sovereign store of value. An asset of fixed supply that works well as a tail risk hedge from fiat money collapse and inflation, while being an effective portfolio diversifier. While its primary use is monetary, its decentralised timestamping capability is increasingly being utilised for other applications such as Microsoft’s decentralised ID system ION.

Information is often mis-interpreted by investors and the media, understandable given Bitcoin represents an emerging new asset class. While it is establishing itself as a store of value and its uses become more defined, its volatility will remain.

The information contained in this document is for general information only. Nothing in this document should be interpreted as constituting an offer of (or any solicitation in connection with) any investment products or services by any member of the CoinShares Group where it may be illegal to do so. Access to any investment products or services of the CoinShares Group is in all cases subject to the applicable laws and regulations relating thereto.

Although produced with reasonable care and skill, no representation should be taken as having been given that this document is an exhaustive analysis of all of the considerations which its subject-matter may give rise to.This document fairly represents the opinions and sentiments of CoinShares, as at the date of its issuance but it should be noted that such opinions and sentiments may be revised from time to time, for example in light of experience and further developments, and this document may not necessarily be updated to reflect the same.

The information presented in this document has been developed internally and / or obtained from sources believed to be reliable; however, CoinShares does not guarantee the accuracy, adequacy or completeness of such information. Predictions, opinions and other information contained in this document are subject to change continually and without notice of any kind and may no longer be true after the date indicated. Third party data providers make no warranties or representation of any kind in relation to the use of any of their data in this document. CoinShares does not accept any liability whatsoever for any direct, indirect or consequential loss arising from any use of this document or its contents.

Any forward-looking statements speak only as of the date they are made, and CoinShares assumes no duty to, and does not undertake, to update forward-looking statements. Forward-looking statements are subject to numerous assumptions, risks and uncertainties, which change over time. Nothing within this document constitutes (or should be construed as being) investment, legal, tax or other advice. This document should not be used as the basis for any investment decision(s) which a reader thereof may be considering. Any potential investor in digital assets, even if experienced and affluent, is strongly recommended to seek independent financial advice upon the merits of the same in the context of their own unique circumstances.

Understanding Bitcoin During the COVID Crisis