Why Bitcoin Miners Will Keep Mining

For the Miners, This Price Move is Effectively Equivalent to the Halving

Since its February 2020 peak of around $10,500, the bitcoin price, and with it, the mining reward, has fallen by more than half. And in a way, for all of those who are worried about the halving this is a perfect prelude because the end effect on miners is the exact same. Hence, the hashrate dynamics we’re likely to see in the upcoming weeks will be an excellent parallel to those we might also see after the halving in May.

So what are we likely to see? Reductions in hashrate. And that’s totally fine.

Here’s the how and why:

When the bitcoin price falls, the miners’ bitcoin income offers less purchasing power to cover ongoing electricity costs. As a result, the miners with the highest production cost will no longer be profitable and will be forced to stop mining (more on these dynamics here, reading it will make this article a lot easier to fully grasp). This is almost exactly analogous to normal commodity production cost curves.

The overall network hashrate will then drop, but this is where the comparisons to normal commodity production stops. For example, iron production costs are the same no matter the price of iron, whereas the production cost of bitcoin is variable and dynamic (see accompanying graphic for an idealised illustration).

Therefore: No matter how little or how much hashrate the combined mining network produces, the Bitcoin protocol will automatically adjust the difficulty such that new blocks are found every 10 minutes on average.

Remembering that new bitcoins are created every block, the difficulty adjustment ensures that no amount of added hashrate could make bitcoins be produced any faster than prescribed. The opposite is also true.

Unless the Price Recovers Sharply, the Hashrate Will Fall, Then the Difficulty

The bitcoin price is now down more than 50% from its 2020 highs. This means that miners’ income has lost more than 50% of its purchasing power. The highest cost producers will now be unprofitable and some will even be cashflow negative. When miners turn cashflow negative they will turn off their gear and hashrate will fall.

This will cause blocks to be produced more slowly than before. In turn, this means that the next time the difficulty is adjusted, it will be lowered, such that the remaining hashrate finds blocks at the same frequency as before.

Whichever miners are able to remain cashflow positive during this transition period will end up having their cost of mining reduced. After the difficulty adjusts downwards, a new balance is found where the remaining miners find a higher percentage of blocks than they used to (aka, their bitcoin income is increased, making up for the loss of reduced prices per bitcoin sold).

The main overall effect is that the cost of writing (and rewriting) the chain decreases. But no one really knows how much chain-writing cost is enough, and that topic is way outside of the realm of what we can fit in this article (if you’re interested we can recommend starting here, here and here).

‘Mining Death Spirals’ Exist Only in Theory, not in Practice

In price environments like these you will hear countless uninformed pundits peddle the ‘mining death spiral’ concern. The weak form of the argument generally goes like this:

If bitcoin prices fall, mining will become unprofitable causing the hashrate to drop. This will grind the network to a halt since no new blocks are mined. This in turn will cause price to drop further causing more miners to shut down until no one is left mining and the price hits zero.

From reading this article you’ll already understand why that form of the argument is absolute nonsense (and also the reason we’ve never observed it in practice even though we’ve had two halvings already and the bitcoin price has fallen by more than 50% on several occasions): the mining difficulty adjustment.

However, there is an edge case in which a mining death spiral could conceivably happen. The steel man form of the argument goes like this:

In such a scenario you can imagine that the price would falter (although hasn’t it already?) and that the future of the system could be called into question.

In real life though, markets don’t move like that. And if they did, a permanent 99% (or whatever) price drop would likely be a signal that something else was fundamentally wrong with the system itself.

On top of that there are operational concerns on the part of miners that prevent shutdowns on such rapid timelines. Powering down a several hundred megawatt mine is not a matter of pulling a socket plug––you would risk severely damaging the local grid. Moreover, many miners have offtake agreements that mandate that they continue their draw for as long as they are able to pay their contracted bills.

The point is: even when bitcoin prices significantly fall (which happens pretty much every year) or the mining reward is halved (which happens at predetermined time intervals), the physical and operational realities of the mining network are such that drawdowns in hashrate take time. In practice, hashrate reductions are therefore always smoothly caught by the dynamic difficulty adjustment and block frequencies never get anywhere near ‘crisis levels’ (whatever that even means).

The Network Was Designed to Handle These Exact Situations

If you’re worried that price drops or halvings will have long-term adverse effects on the operational workings of Bitcoin consider the following: This is the umpteenth time the price of bitcoin has seen a dramatic pullback––it happens pretty much every year at some point or another––and this is the third halving of the block reward.

Because of the design choices we’ve explained above the mining network has never failed to produce blocks. The difficulty has reset downwards many times––sometimes dramatically as the result of a pullback in price (the November/December 2018 is an excellent example to study), but never has the network ground to a halt or even come anywhere close to it. 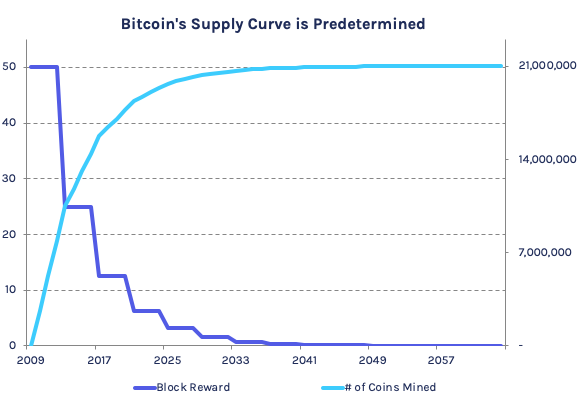 Bitcoin as a monetary system is extremely robust. No matter where the price goes, block generation times are coldly and unemotionally kept at their preset levels by computers, not humans. There is no price level that could cause Bitcoin’s emission rate to increase. When the dust settles on the current financial crisis, the Bitcoin monetary system will have created exactly as many bitcoins as originally intended.

The same is not true of its government competitors.